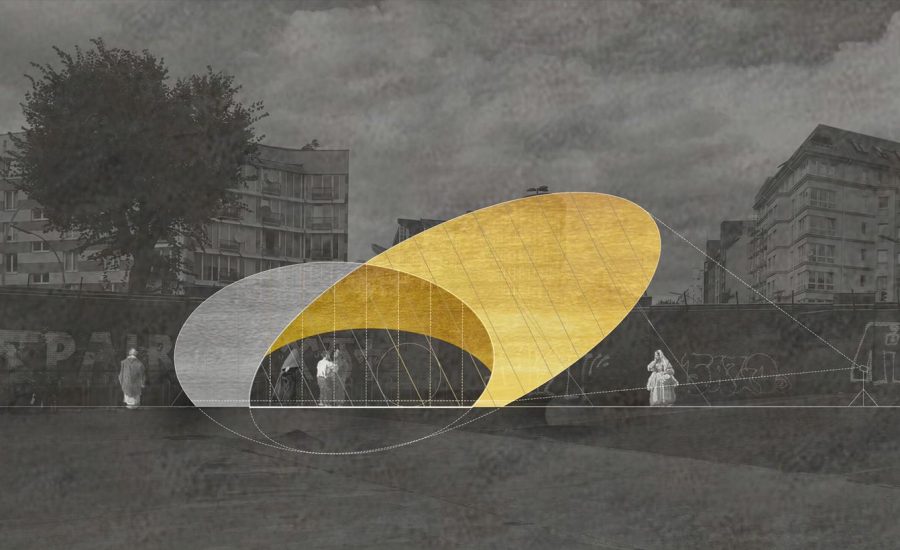 With the desire to open spaces of possibility, the practices highlighted by this event are works-in-progress that research, resist and formulate new questions around the hegemonic extractive logics of consumption and control. Divided in 4 subtopics: Extra(a)ctivism / Alternative Narratives / Artistic Operations / Ethics, the panel discussion “Ecologies of Protest” offers an opportunity to give visibility to a vast but fragile cartography of social concerns which often remain at the periphery of our attention, transversed by the consequences of a neo-liberal economic model brought by colonial history.

The architecture of this encounter is embraced by “The Screen Air Pavilion”, a creation by GA Estudio (Chile) in collaboration with Popticum Collective (Berlin), specially designed to host Agora Collective at Ufer Studios. Born from the precarious circumstances that our organization is going through (within a Berlin context of struggle for production spaces for the independent art scene), the architects responded to the contingency of not having space with a pavilion sustained by air, presenting architecture as a tool of resistance, sensitive to social issues and serving the minorities.

The “Screen Air Pavilion” will be built through a 2-days participatory workshop “Subversive Architectures”, facilitated by GA Estudio, where references and tools will be shared towards designing an itinerant project of social nature, capable of breaking the hegemony towards an open-source and instantaneous urbanism.

“Ecologies of protest” is curated by Paz Ponce (Founder and director of insurgencias.net) and produced by Agora Collective e.V. in collaboration with ZK/U – Zentrum für Kunst und Urbanistik as project partners. The program is Funded by Berlin Senate for Culture and Europe in the frame of the Fellowship-program “Weltoffenes Berlin” and hosted by Uferstudios Für Zeitgenössischen Tanz.

“In our cosmovisions we are beings that have surged from the earth, water and maize. We are the ancestral guardians of the rivers.” -Berta Cáceres

The artist, fellow at ZK/U’s Residency (March-November 2019) is developing an immersive digital artwork entitled “The river told me so”, inspired by the cosmovision of the indigenous land and by the social activist Berta Cáceres, murdered 3 years ago for defending the Gualcarque River in Honduras: a sacred river and symbolic center for the community life of the Lenca people — an ancestral culture linked to the Mayans who inhabit territories of the northwest of the country. This work-in-progress will be adapted with video projection and mapping to the air screen Pavilliondesigned by GA ESUDIO & Popticum Collective. 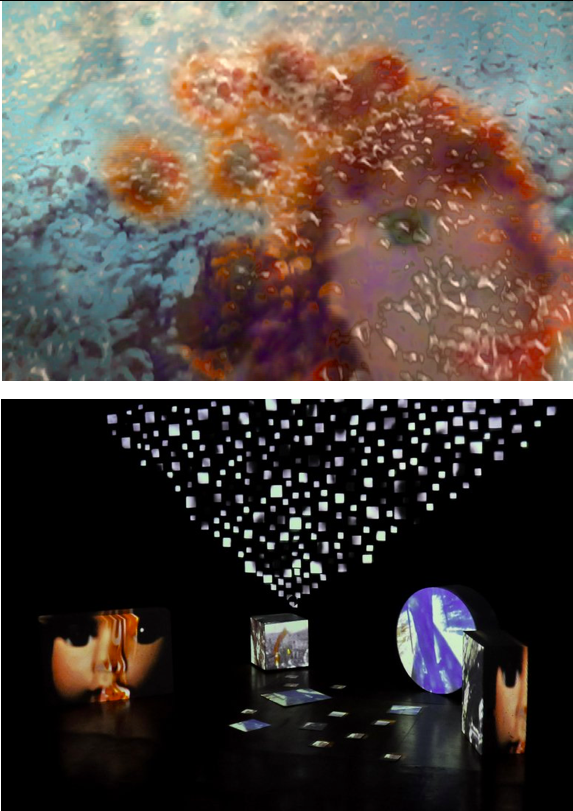 The ongoing boom of agroindustrial biotechnology started in Argentina in 1996, when the first genetically modified (GM) crop was commercially released for cultivation: Monsanto’s Roundup Ready glyphosate-tolerant soybeans. Since then, the monoculture model is applied in Argentina as if territories were open laboratories. More than 300 millions of agrochemicals are being sprayed per year, the cultivated area constantly expanded, record harvests promoted and new GM-traits and crops introduced, without taking a precautionary principle into consideration. Cancer, malformations, DNA-damages, chronic diseases and other health problems are said to be significantly increasing, especially in areas close to GM-plantations.But as the negative socio-ecological consequences and disturbing health issues are piling up, the resistances and alternatives to this model are also growing.

This work is a cartography composed by portraits of people, plants and transgenic events, and a chronicle based on my ongoing research (printed as newspaper publications), and a series of events (exhibition presentations of different stages of the project during which there are public talks with some of the portrayed people and shared agroecological meals). The portraits are on the one hand of people who are fighting against this extractivist model and creating alternatives to it (lawyers, environmental activists, farmers, ecologists, teachers, scientists, doctors, etc.) and on the other people responsible for the implementation of this silent ecocide, from the public as well as the private sphere (politicians, CEO’s, etc.) 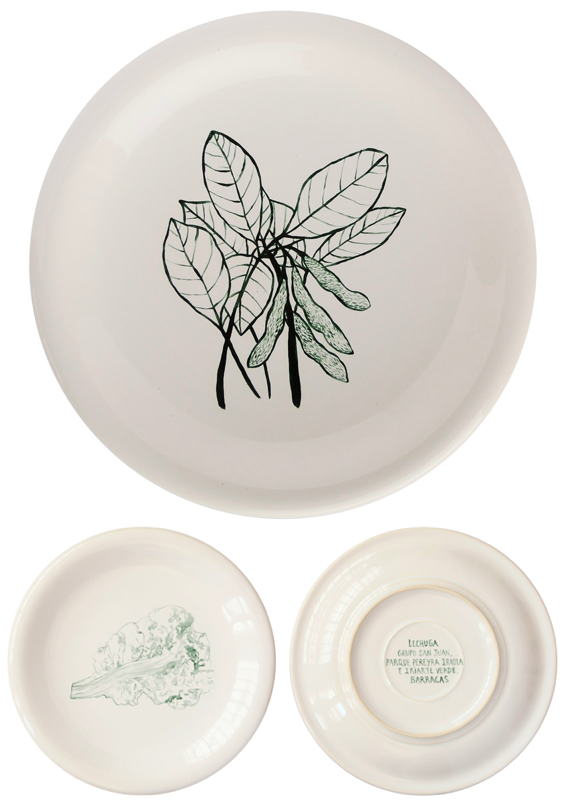 An ongoing project that explores the relationship between Northern and Southern Hemispheres, in regard to Atlantic salmon aquaculture, landscape management and manipulation towards living marine resources. The research evolves from an invitation to participate in a group exhibition in Tromsø, Norway (2016), expanding in different phases in Norway between 2017/18, where she worked together with fishermen, scientists (University of Bergen), philosophers (University of Oslo) and local artists.

The development of Salmon-farming business in Chile by major multinational-based companies made it the second major aquaculture producer of Atlantic Salmon after Norway. The relationship between these two territories regarding their geographical correlations and nuances, has revealed a series of narratives about the manipulation of maritime living resources on a geological and geopolitical level, including one of the worst social and environmental crises, due to the dumping of 9.000 tons of rotting salmon to the sea.

Her interests rely mainly in the topographic, historical and social changes related to the exploitation of resources and their speculation. These are translated through compositions that explore energy properties of mineral compounds. In the frame of this project, the artist’s interests aim is to foster an active discussion within local, artistic, philosophical, scientific and native communities in Nordic European countries, Canada and Chile. 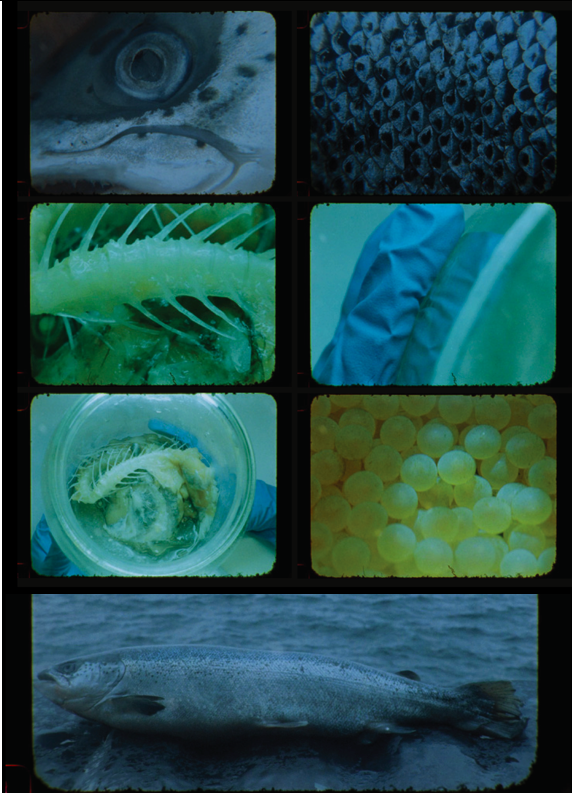 PAPAKUNA is a scenic action in the limits of comedy, music, ritual and mask, which addresses the issue of the crisis of agriculture from the point of view of the chakra. Papakuna is grown on stage as a tribute to our native potatoes and to the people who have guarded these knowledge for centuries.

The world of the potato is investigated in a multidimensional way addressing history, myths, rites, formal and traditional knowledge, artistic declarations, among others. In this way, rural problems such as the loss of native seeds, the fragmentation of community tissues and the tendency towards homogenization of agricultural production systems can be addressed.

The scenic material emerges from a multidisciplinary research process: bibliographic, musical, scenic and experiential. Several interviews were carried out with key actors of the potato world: farmers, theorists and technicians. In addition, various communities of the province of Chimborazo were visited in which they participated in the festivities of the carnival, rituals and days of peasant work. 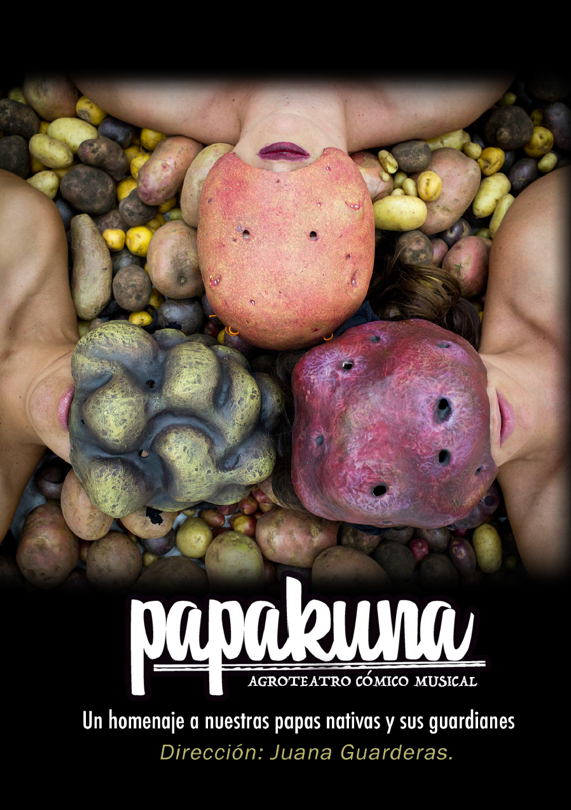 The construction of the”Air Screen Pavilion” (designed by architects of GA Estudio in collaboration with Popticum Collective Berlin) expands into a shared pedagogical space via a 2-day participatory workshop on “Subversive architectures”. Based on the experience of Tomás García de la Huerta and Xaviera Gleixner in the field of ephemeral architecture (The Helium Pavilion – Free Schools; Walk&Talk Pavilion, Portugal 2019), the aim is to share the tools with the participants about itinerant projects whose architecture poses a social, cultural and environmental sustainability. Through the structural qualities of the Pavilion, like mobility and extreme lightness, this type of architecture is capable for example to alleviate the political and cultural centralization with the movement, taking education and culture to the most remote places. Being very useful in Latin-American contexts where the territory expansions and the lack of resources leave extensive areas without access to culture and education, which leads to extreme physical and political isolation in some provinces, accelerating the disappearance of identities and depopulation in search for other places with better educational, cultural and financial possibilities. We will look into examples of architecture seeking to revalue landscape heritage through a minimal and light intervention addressing isolation through an architecture that leaves no trace, allowing a coherent dialogue with the place and its context.

“We live in a cross between imaginaries, memory and future plans. Humans deploy timeliness in “spaces of possibility” that provide the physical and technical environments, thanks to them we give stability to our relationships. So architecture as such, has commonly built stability in social links, but now the concept of stability is in crisis; the fleeting, the mobile, the virtual and technological have taken on special relevance. In accordance with this, architecture must adapt itself to new positions, in form just as in its materiality and content. The action of architecture of temporary structures instead of fixed is made relevant as a policy of resistance to the hegemony of a public space thinking as a place of consumption and control.”

An Example of the previous work by GA Estudio inspiring  the Air Screen Pavilion at Ecologies of Protest is “Helium Pavilion”.

The POPTICUM Collective is a group of young architects and designers originated in Berlin 2014. The name Popticum is derived from the term “pop” like pop-up/popular and “panopticum” as a philosophical and architectural concept of social voyeurism and emancipation thereof.

“We use inflatable installations as a way of engaging a discussion about curatorial practice, opportunistic urbanism and the role of architects and designers as place-makers and provocateurs”.

An Example of a previous work in line with the Air Screen Pavilion at Ecologies of Protest is “Hemisphere”.

ECOLOGIES OF PROTEST is the theme of the II Edition of ¡n[s]urgênc!as : a Berlin-based Platform for socially conscious artistic practices & activist positions from Latin-America. Initiated by Agora Collective in 2018, the aim of this mediation platform is to integrate newcomers into the professional network of Berlin, and help them position their artistic expression in the creative context of Germany, devising different formats to connect them with local experts of the arts sector.

In 2019 the platform takes the form of a Studio & Research program, providing orientation for a single artist-in-focus: GABRIEL VALLECILLO MÁRQUEZ (Honduras), facilitating his arrival and residency at ZK/U Berlin for 9 months, supported by the Fellowship Program Weltoffenes Berlin.